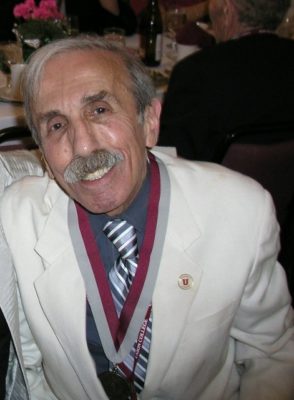 Cheshirepedia has lost a dear friend, founding member and contributor: Dr. Robert L. Chesanow  (known to all as Dr. Bob).  He was Treasurer of Cheshirepedia at the time of his death.

After a reading test, at age 5, he was allowed to start in 3rd grade of the Bryant grammar school.  He graduated from Searles High School in 1951 at age 15 and from Union College in 1955.

A week after graduation from Albany Medical School in 1960, he married Jeanné Stewart, an elementary school teacher, also from Great Barrington. The couple drove out to St. Louis where “Ches” did an year’s internship at the City Hospital of St. Louis (affiliated with Washington University) followed by a  3-year neurology residency at the same school.  In 1964 and 65 they lived in Greenwich Village NYC where Ches was a post-doctoral fellow at Mt. Sinai, continuing his brain research via the tissue culture method.  Dr. Chesanow then joined the faculty of the Neurology Department at Washington University. He was proud to be nominated, by his students to membership in AOA, the honor society of the medical profession.

He and Jeanné moved to Cheshire CT in 1979.  For a short time Ches had a neurology practice in Meriden, then joined the staff of Cedarcrest Hospital in Newington where he stayed for 20 years, becoming chief of the medical service. He loved classical music, listened to it every day, recorded it, and often went to concerts at Tanglewood.  He wrote biographies for the IMDB, a database devoted to films.  “Doctor Bob” looked forward to Tuesday nights playing Trivia with his team at the Ancient Order of Hibernians in Meriden. He would always arrive impeccably dressed in a shirt, necktie, and jacket.

Severe injuries sustained in a car accident on August 22, 2018 led to a long stay in critical care units at St. Mary’s and then Hartford Hospital. He never improved enough to leave the critical care unit, but his family wanted to honor his wishes to die at home. With the help of a home hospice team they arranged for him to go by ambulance to his home in Cheshire, where he died the next day, September 20th.

Dr. Chesanow is survived by his wife Jeanné, his brother Dan and wife Sheila in Tennessee, his sons, Andrei  52, Matthew 50 and his wife Dawn and their children Carson 18, Caleb 17, Aiden 15, and Maddelyn 13.